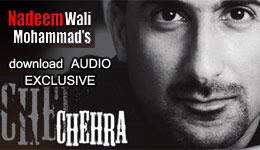 Latest news/Updates about Nadeem Wali:
Nadeem Wali Mohammad wouldn’t let the fire created by his first CD album “MEMORIES” fizzle so easy. Keeping the promise he made to all his fans, he’s back. This time with a Pop album.

Having been in recording and mixing for the past 3 months, Genius Records long awaited album, featuring Nadeem Wali Mohammad has been scheduled a release.

Genius Media is excited to announce that Nadeem Wali Mohammad’s new album “CHEHRA” will be released in Pakistan on Eid, October 2, 2008.

The album will comprise of 12 tracks in total, with the title song Chehra already playing on FM stations all over Pakistan. The CD has a variety of songs sure to please connoisseurs of music. It includes dance numbers like Kuch Hai Kiya Hai, a national song Hath Berha Ke and a classical number Sargam.

Chehra was digitally recorded, mixed and mastered at Genius Records Studio which is owned and operated by Ashraf Imran Sajan. Genius Records is located in Defense Phase II and also has an office in Dubai. All compositions and arrangments are done by Asif Imam.
Stay tuned for more details!

One response to “Chehra by Nadeem Wali Mohammad – Exclusive Audio”