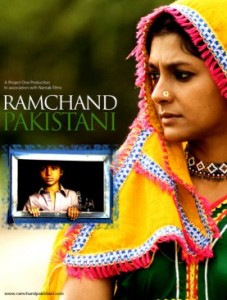 RAMCHAND PAKISTANI is a simple story, a true story in fact, of a kid and his father crossing the LOC and being held captive in an Indian prison. A theme like this ought to be handled with gloves and director Mehreen Jabbar does just that. A sensitively told story that succeeds in making you think of the plight of scores of people who’ve accidently crossed the border and are, perhaps, still languishing in various jails.

RAMCHAND PAKISTANI is a true story concerning the accidental crossing of the India-Pakistan border during a period of extreme, war-like tension between the two countries by two members of a Pakistani Hindu family.

The child from Pakistan, aged eight years, learns to cope with the trauma of forced separation from his mother [Nandita Das] while being held prisoner, along with his father in the jail of India. What transpires is the crux of the story.

Real life stories are difficult to interpret on reel, but Mehreen Jabbar tries and succeeds. It may not be the most mesmeric tale you’ve experienced, but the story and how Mehreen and the writers adapt it cinematically makes it a moving experience.

Having said that, you can’t turn a blind eye to the discrepancies in the screenplay. A few portions running parallel to the story just don’t hold. Wish the director would’ve concentrated on the main issue, instead of deviating into unwanted tracks, like the female jailor’s [Maria Wasti] relationship with one of the guards, or the helpless mother’s [Nandita Das] secret admirer [Noman Ijaz].

RAMCHAND PAKISTANI is also watchable due to the fine performances delivered by just about everyone in its cast. But it works mainly due to Syed Fazal Hussain’s sterling act as the young Ramchand. He conveys the pathos and helplessness with aplomb. Even the grown-up Ramchand, Navaid Jabbar, is equally competent.

On the whole, RAMCHAND PAKISTANI is a simple story well told. Business-wise, the problem is that it faces a strong opposition from two major releases this week. Besides, a film like RAMCHAND PAKISTANI caters to a select audience, which means that it might go unnoticed in the domestic circuit.