The second coming of Ali Azmat

After 2005’s critically acclaimed Social Circus, Pakistan’s original rock rebel is back. Klashinfolk proves Ali Azmat made just the right call by going solo from Junoon. He dons the role of singer, songwriter and producer and delivers on all three fronts. 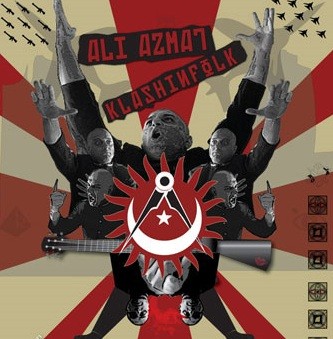 There’s a song on Ali Azmat’s new album, Klashinfolk, titled ‘Sawal’, a lyrical expression on the ongoing depression that has for some time been sweeping across the nation. ‘Sawal’ hints at our perpetually uncertain future and the affect this uncertainty on the lives of everyone.

(Behold the scattered view and it seems it will stay this way
Eyes will keep on watching
When the journey is a moment what is the view of a treveller
What will rise, what will fall, what is happiness)

Given that Ali Azmat’s songs have always provided such a transparent commentary on various stages of his life, Klashinfolk, tell us best what Ali was feeling throughout 2007 when he was working on this album till this year when it was finally released.

Last year was perhaps the worst in the history of Pakistan and also the most dynamic in terms of the media revolution. No wonder Ali’s album is a mixed bag. It is hopeful, it reflects a fighting spirit and at the same time, a Ali Azmat is very much a lone figure still figuring it out. In that it is similar to Social Circus. Ali’s second album like his first reflects a state of mind and this then has become Ali’s forte as a solo artist. Intrigue is the name of the game.

A million miles away from the once-formidable Junoon, Ali Azmat has found his groove, his own personal signature and if with Social Circus he learned how to walk on his own, with Klashinfolk, he is rolling with it.

Ali has never shied away from sharing his inner-most emotions and personal experiences, both in his music and his interviews and it is this effort of his to step outside the pedestal that has endeared him to fans. True to this image remains Klashinfolk, Ali Azmat’s second solo offering after the massive solo record, the mighty album we know as Social Circus.

It comes at a strange time. A time when musicians are making some of their best music, and ironically, when the country itself is in a petrified and confused state.

But there are hints; often subtle enough to not even be detected unless you listen carefully that reflects the social dichotomy. But not to the level one may have expected it.

If Social Circus expressed the turmoil of Ali Azmat – hot on the heels of breaking away from the biggest and most iconic band in the history of Pakistani music, Junoon, and the staggering height of expectations, the thirst to prove himself as a man who can do it on his own and rise to the top – Klashinfolk does the same. The only difference is, this time, Ali Azmat is more content, more at ease and that reflects not just in the words but the musical direction this album has taken.

A far cry from the melancholia of Social Circus, Klashinfolk is hopeful on most notes but there are also shades of grey and they make for an intriguing listen. A journey through the mind of Ali Azmat with the craftsmanship of Omran Shafique on guitars, John L Pinto aka Gumby on drums, Kamran Zafar aka Mannu on bass and Ali himself on acoustic guitars.

The emotions bare all, loneliness, hope, love, loss, frustration all tied together in a nifty package.

From the hopeful and introspective ‘Tanha Hai Kyun’ where Ali intelligently states the difference between living and existing and sings, “Jeena Hai Kya/Marna Hai Kya/Tujhe Bhulay Na Kabhi/Taray Ki Aankh/Sab Duur Ho/Aur Pehlay Roshni/Bhujnay Na Dey/” (What is life? What is death? I never forgot you… it all seems far to the eye of a star… and that first light will never let you fade) to the jazzy ‘Mere Saathi’ where he creates a magical world, a world where sadness is followed by happiness, where the sun will shine, eventually.

As a songwriter Ali asks the evergreen question but with a punch. One example is ‘Tera Mera’ where he says, “Tera Mera Milan Nahin Huwa Kya?/Tujhe Yaad Bhi Nahin/Ehsaas Bhi Nahin” and more daringly he says further, “Main Na Tujhe Kabhi Nahin Chua Kya?” (Did we never come together? You don’t remember, you don’t sense… did I never touch you?) It sounds simple enough but with its grating guitars, and loud, fast drums, it’s an addictive rock tune, an edgy love song for contemporary relationships.

What’s even more interesting is the way Ali sings each tune. It’s simultaneously uplifting and yet not overpowering. And his tone shift appropriately to match each particular track. Most of the songs are highly textured and they defy convention and stand distinct from one another.

Take ‘Mera Khuda’ which is open to so many interpretations but I wouldn’t stretch to the love theme.

“Tu Woh Azal Hai/Jo Muhabbat Hai/Yakeen Hai/To Bharosa Hai/Charcha Tera Hai/Jo Numaya Hai/Bayaan Hai/Dekho Tujhe/Har Aas Mein/Chaho Tujhe Har Sans Mein/Tu Ibtida Hai/Tu Inteha Hai/Mera Khuda Hai” (You are the beginning of love, of belief, of trust. You are the topic of conversation that is visible everywhere. I see you in every longing. I long for you with every breath. You are the beginning, you are the end, you are my God). Ali sings while Omran creates a gorgeous whirlwind of music with his power instrument – the guitar. It’s the sing-along factor that makes it all the more appealing.

But love does find its way, dominantly on the flirtatious and tipsy ‘Yeh Kya Huwa’ as the lover asks, intoxicated with the beloved, to never leave. It’s a powerful tune, with an air of celebration that just strikes one hard.

Speak of beefier tones and ‘Gallan’ – the video for which is running on airwaves and marks Ali’s entry into the clay-motion video format and sees foil ants, great acting from Ali Azmat, a battle in the most adorable and hilarious manner conceivable – takes the cake. It is a crazy tune and mostly a monumental musical piece with throbbing bass, menacing drums and electrifying riffs.

Like ‘Gallan’ there is another Punjabi song, ‘Ley Sambhal’ on this album and this one is rather somber as far as the music goes.

“Tere Bina May Na Rava/Tera Zeher Ja Main Piya/Ja Mara/Ki Kara” – its actually one of the best tunes in Punjabi done as a rock song. And here it has to be said that the melody is what makes this tune such a wonder. It’s wonderfully constructed and has a moodiness that is so characteristic to the musician that is Ali Azmat.

And then there are the ultimate tunes, ‘Shukria’, ‘Sawal’ and ‘Naina’ that take this album in a darker direction, and it is here that one finds shades of our surroundings rather magnificently.

Be it ‘Sawal’ on which the questions remains unanswered and despair finds its way in all honesty or ‘Shukriya’ that is drenched in morbidity of losing someone and tackles the emotions of loss.

Then there is ‘Balaman’ that is to Klashinfolk what ‘Teri Parchaiyaan’ was to Social Circus. A ballad with a punch, a musical character that is soft in approach with the music never overpowering its flavour. Ali sings with conviction that is reminiscent of him on earlier hits like ‘Mungagan’ and ‘Teri Parchaiyaan’.
The only thorny tune is ‘You Are’. While musically the bass shines here and the dark haunted undertones make it interesting, it loses points because the song is in English. Had it been in Urdu it would’ve been far more interesting.