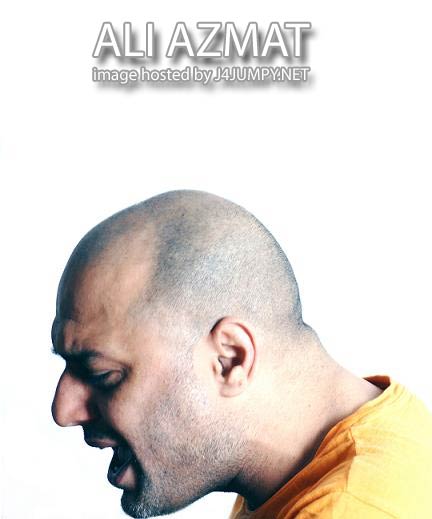 The last Ali Azmat gig I attended was a Junoon concert sometime in 1998 at the Alliance Françoise in Karachi. Needless to say, I was pushed around, got an accidental bonk on my head from the danda of a policeman who was supposed to be a part of the security arrangements and saw people doing the bhangra in front of the stage while throwing glass bottles at the musicians. There were others who were trying to scale the walls of the venue with baton-wielding policemen trying to ward them off. It was utter and complete madness. To top it off, by the time I got in Junoon had already performed their last two songs and left the stage. I vowed never to go to a concert open for the public in Pakistan ever again.

I’ve broken the promise I made then several times. The exceptions were the Brian Adams’ concert in January 2006 and a Bayview concert held later that year as well in which the original Fuzon, Mekaal Hasan Band and Noori performed — without Ali Jafri, although he did come on stage to perform one song. Gumby was still a part of Noori during that concert although the band officially split right after they performed on stage.

After performing a plethora of concerts abroad right after the launch of the much-awaited Klashinfolk, Ali Azmat finally performed in Karachi last week. The concert was organised by a local university and when I got there, I was taken aback to see how parking stretched on for well over a mile outside the venue with police patrolling the area. Once inside, I could see a gatecrasher trying to jump over a wall and a bunch of (presumably) male students running towards him and beating the crap out of him. More and more students joined in till several policemen rushed to the spot. The scenario brought back a feeling of déjà vu — it was reminiscent of what used to happen at Junoon concerts — ten years hadn’t changed anything.

Once inside, the performance area was full of excited students and by the looks of it, I braced myself for potential trouble. Making my way to the backstage area, which was really nothing more than a part of an empty ground, on the left hand side of which Zeeshan Parwez was shooting footage of the concert and the audience (I’m assuming for the next Ali Azmat music video). From where we stood the stage and the audience were clearly visible.

The Ali Azmat band, which featured Waqar ‘Wacky’ Khan on drums, performed several numbers off Klashinfolk, including Gallan, Yeh Kya Hua and Ley Sumbhal. It was heartwarming to see Ali give himself to the crowd — he interacted with them and encouraged them to sing along. But it was the crowd’s response, which I reiterate was predominantly composed of the 17-year-old to 21-year-old age group, that was pleasantly surprising.

They sang along with him and hooted in excitement if Ali so much as bent forward to come closer to them. But I think a moment that stood out was when a member of the audience threw a plastic water bottle at Ali which he promptly kicked off the stage. Anyone who’s been to a Junoon concert knows that the band was often pelted with glass soft-drink bottles that at times can prove to be hazardous. Anyone at such a concert can vouch for the fact that there have been times when the band has stopped performing and asked the crowd to behave.

However, according to Ali, concerts are too few and far in between to begin with in this day and age when so much socio-political activity is going on in the country to depress its inhabitants. He then collectively asked the audience to condemn the bottle-thrower. And surprise, surprise! All one could see were palms risen in the air. The culprit had been publicly shamed.

The band was called in to perform an encore which they did, one of which was requested by the audience of Garaj Baras. Ali ended the concert by speaking about how he thoroughly enjoyed the experience and how it was what he looked forward to as a musician.

The moment the concert ended another fight erupted outside the performance area. What was frustrating was that there were members of the faculty standing about who seemed least concerned. I assume that they were there to see that the students of that university and their guests behaved. So why the indifference, guys?

Having said that, the concert was an experience-and-a-half. Those who previously stated that Ali’s prime audience had aged with him and that he does not appeal to the ‘young’ crowd anymore… think again. The only other time I had seen a crowd respond this way was when Noori first took to performing on stage. If this wasn’t a testimony of Ali Azmat still being a predominant rock star, I don’t know what is.