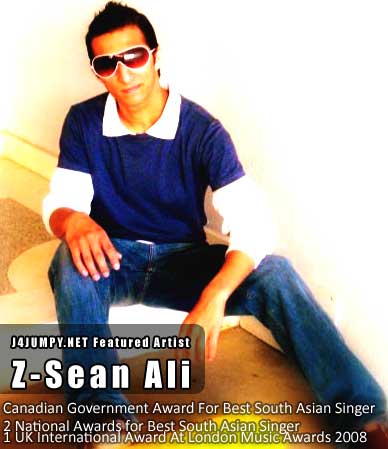 Biography:
Zsean Ali A.k.A Zuhair Sean Ali was born on 31st December 1986, In Karachi, Pakistan, he moved from Pakistan to Canada when he was 1 year old, after completing his studies In Business Management, he joined the music industry His first song was created in 2003 with the RDB Studios Toronto, when he was only 17 years old, which was a huge hit in the region of north America, he was awarded the best Canadian south Asian singer at the age 0f 17.

He has Upto Date Done 200 Shows with Stars Like Jazzy B, Rishi Rich Project, and Many other Huge Singers including India’s Famous Himesh Reshammiya, it has been more than 6 years, and now he is a famous known personality in the music industry, he has been awarded 2 national and 1 international UK award in London Music Awards for best south Asian singer catagory. His music career continues as he spreads the magic of his music all over the world.

check it out on MySpace – www.myspace.com/s2bzseanali