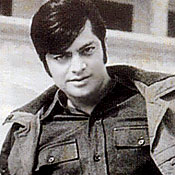 Decades after films such as Armaan and Doraha were released, the debonair Waheed Murad remains a treat to watch. An exceptional actor who had a screen presence that his leading ladies envied, Lollywood’s quintessential chocolate hero died 26 years ago today.

The early death of this educated and talented actor and producer was one of the major blows to an industry that now lies gasping for air. Murad was born on October 2, 1938, in Karachi and news of his death on November 23, 1983, left many eyes brimming with tears.

He starred in 123 feature films and earned 32 awards for his unmatchable performances.

Whether Murad was making a smooth entry in Armaan singing Ko Ko Korina or flirting with Shabnam as he followed her (rather stylishly in a red convertible) crooning Kuch Log Rooth Kar Bhi, songs were an essential part of his image. To pick from his repertoire of immortal melodies is a difficult task.

Here, lists its top 10 favourite Waheed Murad hits. Let us know which one is your favourite?