LAHORE: Several event organisers are escaping the tax bracket by labelling a concert as a dinner, which is illegal, according to the rules of the Excise and Taxation department.

“Certain such cases have come to our notice where organisers plan a musical night, charge Rs2,000 per person and say it was a dinner. They may provide food but that’s not what the event is ­— it is a musical evening. They are fined and action is taken against them but this only happens when we find out about such matters. Such events are often not advertised and cater to a limited crowd, so they go unnoticed,” an official in the Excise and Taxation department told The Express Tribune. 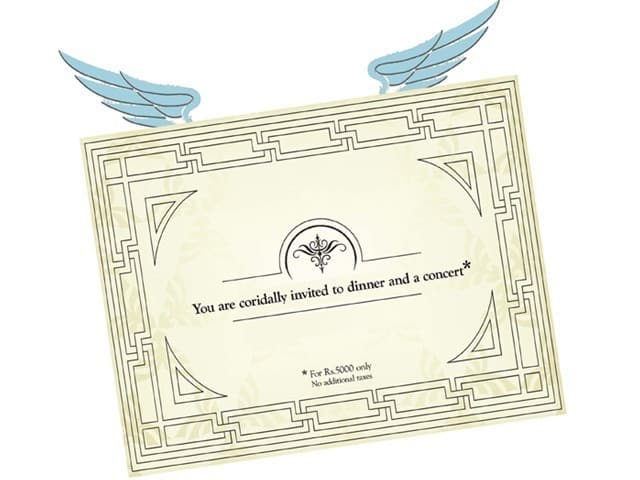 One example is of a concert recently organised in Lahore, which featured a performance by Rahat Fateh Ali Khan. One of the organisers told The Express Tribune that they paid Rs1.6 million to the singer for his performance. He said that no tax or entertainment duty was paid as the event was held at a private place and the amount was paid to the artiste in person. “There isn’t any question of paying entertainment tax. Only selected people were invited and it was a dinner along with the performance,” the organiser hurriedly explained.

However, when an event is held at an auditorium or similarly at a public venue, it cannot go ahead without paying entertainment tax and obtaining a No Objection Certificate (NOC) from the Excise and Taxation department.

A senior official in the department conceded that several such events took place without paying entertainment duty. “If someone wants to organise a concert, play or any performance he/she has to obtain a NOC and entertainment duty is charged in all cases except if the event is for charity or fundraising. We take action if any such event comes to our knowledge where rules are being violated,” he said.

He said that the department could take action only if performances were ticketed. “If there are no tickets on performances and the artiste is paid a large amount, we can’t deal with this on our own. This has to be done by the Income Tax department. We can only take action if tickets are charged for a performance which is shown as a dinner or a party and we are then informed of the matter,” he said.

When asked how this practice can be stopped the official replied that the department took action when any such thing was reported, adding that all private venues, such as farmhouses (where such performances are often held) could not be monitored.