#Annie recently released her second album, ‘Kiya Ye He Pyar Hai‘ in the United Kingdom and is all set to collaborate with the UK’s Top Dance Music DJ and Producer ‘Judge Jules‘, known for his DJ activities and popular radio show which achieved global success. 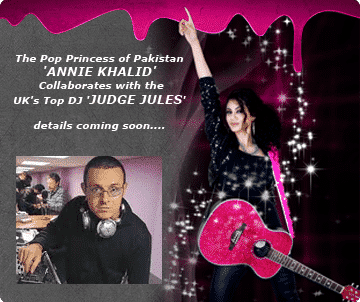 Judge Jules has won many accolades for his DJing skills, been voted number three in the “Top 150 DJs in the World” by DJ Magazine in 1998 and “Best DJ” (Muzik Awards) in 1999. He has also been voted “Best Radio DJ” at the Ministry Awards, No.1 DJ (Mixmag reader’s poll), “Best International DJ” (Dancestar), and “Best Radio DJ” at the Smirnoff Dancestars. In 2000, he was voted number six in the “Top 100 DJs in the World” by DJ Magazine. In 2001 and 2006 he won “Best Trance DJ” at the Ibiza Pacha Awards. Jules has also worked as a journalist and was a contributor to the UK-based black music magazine ‘Soul Underground’. In 2009 Judge Jules started supporting the UK charity Breakthrough Breast Cancer joining the Breakthrough Running Club as the club DJ. Jules has earned his place amongst the DJ aristocracy. Awards aside, there is no doubt that Jules remains one of the most popular figures in dance music, both home and abroad. Jules’ DJ sets are the epitome of what DJing is about – passion, amazing tunes and a pair of hands capable of the most nimble of mixing.

Jules’ deck skills are consistently in demand in Western and Eastern Europe (incl. Czech Rep., Russia, Romania, Hungary, Spain and Germany), the US, the southern hemisphere (Brazil, Argentina, Australia, Hong Kong, Singapore and India) and on the African continent (The Pyramids, Egypt) and also U.A.E.

The details about the collaborative project have not been revealed yet but after looking at the career of Jules, this collaboration seems quite interesting.