“Bol” is slated for an Eid release on 31st August in India and rest of the world. Talented director Shoaib Mansoor is back with a hard hitting social drama titled ‘Bol’ after his critically acclaimed and award winning ‘Khuda Kay Liye’. 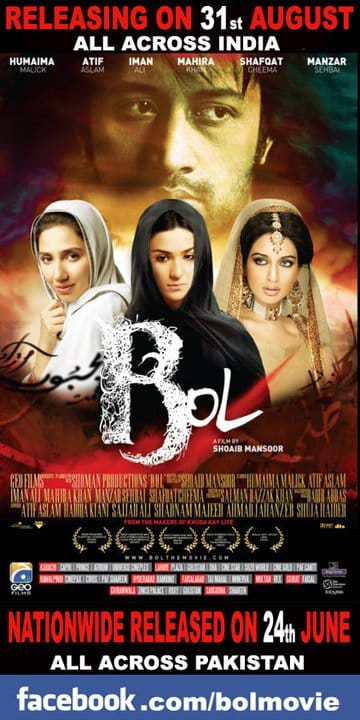 Eros International’s ‘Bol’, in association with Geo Films and Shoman Productions is the story of a girl, a daughter who stands up and challenges the age old societal norms of treating women as lesser beings.

The movie which released in Pakistan on 24th June along with ‘Double Dhamaal’ has been declared a super hit as it has received a tremendous opening and grossed about 49 lacs on the first day beating many high grossers like ‘Ready’ and ‘My Name Is Khan’. (Ready’s first day grossing was 40 lacs).

The movie has received outstanding reviews that talk about how the director Shoaib Mansoor who explores the rights of women and treads no-go areas like homosexuality and the life of eunuchs besides Shia-Sunni dynamics in a nation dominated by Sunnis.

Produced by Shahid Jamal and Shoaib Mansoor, ‘Bol’ is based in Lahore and aims at highlighting the sorry plight of women who are treated as a worthless burden to a family in most parts of the society.