Khamosh Raho is the latest flick of seasoned director Altaf Hussain starring Shaan Shahid and Juggan Kazim together in lead roles for the first time in any film. Having an approximate budget of 1.5 crores, Khamosh Raho hit the countrywide cinemas on 10th June 2011 and became the first Pakistani movie to release this year. 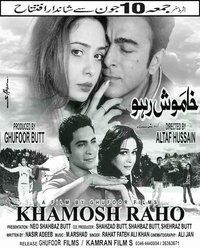 Despite being a film having Shaan and Juggan in lead roles and Rahat Fateh Ali Khan at music department; Khamosh Raho didn’t really manage to create an image of being an “A class” movie or at least come to a level of Bol or Love Mein Gum. Surely a weak promotional campaign and low visual quality can be stated as two basic reasons for this.

Indian director Mahesh Bhatt once said that a good movie needs a promotional budget of at least 80% of its total budget however equal is always best. Leaving the talks about movie’s promotional budget far behind, not at least a proper trailer of Khamosh Raho came out on internet which now has become one of the most vibrant means of film promotion, and the only thing that people got to see to make-up their mind to go and watch the movie were some song videos and that too not in good quality.

Connecting further the topic of promotion and story together, you would remember producer and director of Khamosh Raho claiming before the release of their film that movie is made keeping in mind the entertainment requirements of a family, so that a person can watch it with his/her family without any hesitation. But against all these big claims when it came to the promotion of the movie, makers of Khamosh Raho released one song featuring Juggan dancing in a typical Punjabi film style in front of the villain, while in other song they showed Juggan romancing Shaan, which surely wasn’t depicting the image of Khamosh Raho being a family film, but still we would say that songs are pretty good and can be stated as the next big thing of the movie after its cast.

Now let’s talk about the visual quality of the movie, though we are mostly receiving positive reports about the visual quality of the film and our sources are of the view that quality wasn’t as bad as shown in the promotional songs on internet and is pretty much watch-able, but as we are giving a ‘Pre-Cinema Verdict’ review on the film so we won’t discuss something ahead of movie’s cinema release. This year we are lucky that we would get to watch so many local films to enjoy and thus we are experiencing the promotional campaigns of each one of them, this has made our work easier. Why? because we can now easily compare the marketing of one film with another. Even the makers of Khamosh Raho would agree that the marketing of their film was far below than that of Bol, which is now setting a standard for movie promotion in local film industry through its extensive promotion which we haven’t seen in past.

A great role in the successful ongoing marketing of Bol is played by the quality of song videos and trailers which are part of its marketing campaign. The quality is so amazing and persuasive that even the particular class of cinema viewers who just don’t watch something below Hollywood are now forced to make-up their mind to go watch the movie when it releases. Apart from this, the promotion of film on internet is also very remarkable and can be compared with any of the Hollywood or Bollywood movie. Very much contradicting to all this strategy, makers of Khamosh Raho preferred ignoring the potential of internet and released maximum two or three songs which were not even in good quality. But one thing that is surely worth praising in the marketing campaign of Khamosh Raho was its promotion on different TV channels, we saw Express News promoting the movie through its morning show and news reports while on the other hand Filmazia was continuously running its song promos which surely would have caught lots of eyes.

Apart from all this one disappointing fact about the movie is that if we analyse the overall promotional campaign closely we would get to know that the star points of the film weren’t promoted much, for instance one of the star factors of the movie was its music where for the first time internationally acclaimed Pakistani singer Rahat Fateh Ali Khan sung five songs for a movie, but all we got to hear in the promotional campaign were barely two songs of him. Apart from this, the official movie stills released before movie’s cinema release were also mostly promoting the newbies (Sheraz Butt and Marium Khan) which was giving a silent sense that producer Ghafoor Butt mainly invested in this movie just for the sake of introducing his son (Sheraz) into the industry and he just ignored the real potential of Shaan and Juggan Kazim and rather used them to increase the overall market of the film. Injecting new blood is not at all bad but then why not launch a new actor with a full-fledge power marketing just like we saw in the industry of our neighbouring country (Amir Khan launching his nephew Imran Khan).

Although the promotional campaign wasn’t up to the standards but we would surely request you all to first go and watch the movie and only then throw opinions about it. As we haven’t got the final reports on film’s ‘cinema running’ through independent sources; we preferred not to touch any aspect of the film beyond its promotional campaign.