Slackistan: The banned and the beautiful (Article)

ISLAMABAD: Finally, the introspective Slackistan – accused of “navel-gazing, Pakistan-style” by The Guardian – made its exclusive, weekend-only debut at Cinepax, Rawalpindi, on Friday. 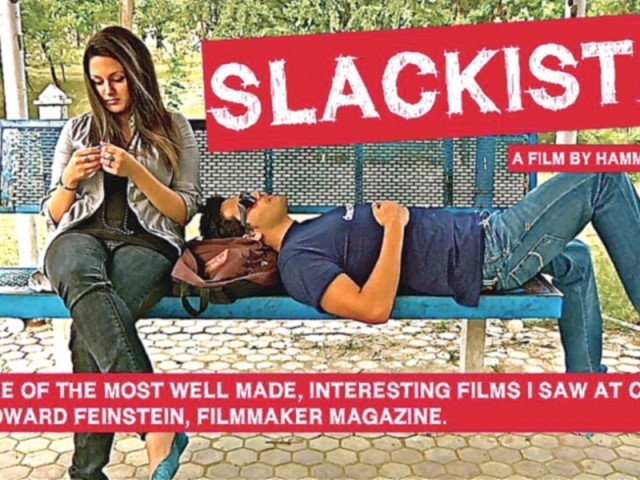 After a brief incident involving a woman banging on the doors of the movie theatre (she was enraged that ‘so and sos’ family was let in early as a favour), the audience was finally seated. Friends and family of the cast members, along with the sort of bourgeois and anglicised Islamabadi kids the movie portrays, dominated the scene.

“The director Hammad Khan would like to clarify that the quality shown tonight does not reflect on the actual quality of the movie,” announced cast member Ali Rehman. Somewhat mindful of the censor board’s controversial ban over the use of certain words, Cinepax screened a badly censored version of the movie. A great deal of the controversial verbiage in relation to the Taliban, mullahs and homosexuals came through clearly, much to the delight of the audience members.

The Motion Pictures Ordinance 1979 clearly states, “A film shall not be certified for public exhibition; if, in the opinion of the Censor Board, the film or any part thereof, is prejudicial to the glory of Islam […].” So much for that.

In a press release, Khan said, “The censor board’s verdict is oppressive, arbitrary and steeped in denial about life outside their government offices.” Lucky for Slackistan, Cinepax’s “non-oppressive” policy for screening movies unavailable for wide-release, allows Facebook users to take an online poll; if enough people vote, the movie screens. This is exactly what happened.

The movie centres on the disillusioned life and times of Hasan, played by Shahbaz Shigri, his eponymous love interest, the alluring and fresh-faced Aisha (Aisha Linnea Akhtar), and a band of sidekicks forced to negotiate between individual agency and a deadpan city that ‘always sleeps’ and frustrates its youth to the point of madness.

The superficial and high-flying party boy Sherry (Ali Rehman), in particular, was an asset to a movie that otherwise left very little room for adequate character development. Fashionista Xara’s make-up removal scene to demonstrate some sort of new-found feminism and personal growth, albeit moving, fell flat coming from a character that did not get as much air-time as, say, the endlessly brooding Hasan (his video camera toting personal journey advances from him wanting to be a filmmaker to realising that he really does want to be a filmmaker at the movie’s close). The piecemeal of unresolved sub plots made it challenging to appreciate the movie as a well-executed and cohesive whole. For a slacker movie chock-full of lethargic or otherwise jaded characters, to work, it isn’t wise to slack off on production and cogent plot resolution. This is what sets quality apart from poorly researched work.

Still, the audience response was, for the most part, positive and supportive. “There were a lot of amazing parts in the movie,” said Bee Khan, a spectator who was glad that Pakistan’s struggling film industry was making waves.

“Watching it again, in Islamabad, reinforced my belief that the censorship was totally uncalled for,” said Osman Khalid Butt, who played Hasan’s quirky and erudite friend Saad, after the screening. “I mean, it’s the sort of language people use in day-to-day conversation.”

Still, the audience was left wondering who these characters were beyond being jaded Islamabad residents. The attempts to reveal how they evolved were a little too literal (see the abovementioned reference to Xara’s make-up removal).

Perhaps Slackistan would have had more impact had its director and producers chosen Sherry as the protagonist. His character is complex; viewers learn that borrowing vast sums of money afforded Sherry his trademark lifestyle. In this respect, Sherry is a lot more human — his traits and dramas are ultimately more interesting. He grows as a person after getting brutalised, and learns the value of friendship in a city of slackers and rich kids.