Since the release date of Ali Zafar‘s much awaited third studio album is getting closer, Prince of Pop is leaving no stone unturned to promote his Sufi album which has been mastered at world’s famous “Abbey Road Studios”. The album tagline is sab keh sanng jhoom. Mobilink organized the grand event for Ali Zafar’s album launch at the Mohatta Palace which is located in Karachi. He was wearing Munib Nawaz for the “Jhoom” launch show. It was a grand evening, with a lot of celebrities, romantic music and an incredible dinner for the guests. 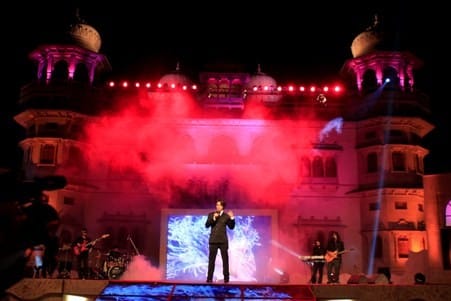 With Jhoom, Ali Zafar showed a more romantic side of his and perhaps that was the theme of the evening as well: the dim lighting and the beautiful background created an almost perfectly romantic atmosphere for all the celebrities present there.

The show was hosted by Dr. Shahista Wahidi, who entertained the audiences and her little accident when she got Ali Zafar’s name wrong provided the audience with some chuckles. She called upon the stage all those people who have played an important role in Ali Zafar’s career, and the audience was reminded his eventful career by the video montage that was made with clips of every song or advertisement he has ever done.

Hairstylist, Nabila was the first person to come on stage followed by some other very well known celebrities, such as Shehzad Roy, Tariq Amin, Amir Adnan, Frieha Altaf, Faisal Qureshi, Aijaz Aslam and Faakhir. Some more famous faces that could be seen in the audience were Wasim Akram, Feeha Jamshed, Atiyah Khan, Munib Nawaz, Gumby and Omran Shafique and Saqib Malik.

Some dance performances took place at the event which were very neatly choreographed, with beautifully designed costumes. Finally, Ali himself came on stage, and showed his first video of the Sufi album, ‘Jhoom’ which will be released worldwide on the 14th of Februray, 2011. The song is definitely a must-hear for all Ali Zafar fans, especially for those who’ve loved his style in the first two seasons of Coke Studio.

“Jhoom” represents his journey as an artist and makes a distinction between what’s real and what’s fake, what’s permanent and what’s temporary, and is different from what he has done in the past. With Jhoom, Ali has tried to take his music to another level, and hopes to succeed in it.

Ali then went on to perform a few songs from his upcoming album, which included Dekha Jab Seh Tujhe, and Jaane Na. While the audience was enjoying the music and the arrangement, the best part perhaps was Ali Zafar himself. He came on the stage and spoke to everyone in the most charming manner and ammused the audiences. After all these celebrities had come up and praised him as much as they could, was this:

“Please, if you all think I have become a star or something, then don’t. I personally don’t like such destructive thoughts. I think when a person starts believing that he’s something better than others is the day he becomes dirt. Mujhe Nabila jaisay log make up laga detay hain, (people like Nabila doll me up with makeup) aur Amir Adnan jaisay log achay karpay pehna detay hain (people like Amir Adnan dress me up in fine clothes) iss liye shayad mein thora behtar lagta hoon TV par. (Maybe that’s why I might appear to look a little better on television) But seriously, I am the same person I was when I started out. I’m not a star or anything like that.”

Then some more memorable moments of the evening were the amusing ones, where the audience got to laugh a little. One such moment was when Ali Zafar called up Saqib Malik on the stage, and started talking to him about this one time when Saqib tricked him into shooting an extra scene for a Dettol commercial.

“He tricked me and said that we need to shoot a scene of me sitting and taking a bath. I even fell for it, and shot the scene, only to found out that these guys were just fooling around.”

Saqib Malik then added
“I still have that footage and I’m ready to sell it for some very high rates, if anyone’s interested.”

The album has been put together in collaboration with Mobilink Jazz, and they were the ones behind this grand evening which was filled with some great music and even greater people.

Jhoom will release worldwide on the day we celebrate love, the valentine’s day! Jhoom will be released in Pakistan by Ali’s own record label Alif Records on the 14th of February, 2011 whereas Yash Raj Music will release it in India and rest of the world on the same day.

-The event was covered by Manal Faheem Khan for the Instep Today.