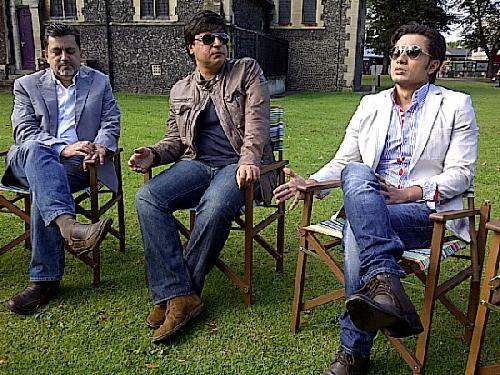 “We are committed to working with the best talent in the business and are delighted to be working with Goldie and Shrishti on London Paris New York. It’s an amazing script that we are all very excited about. With comedies driving audiences into the theaters this romantic comedy is the film to watch out for in 2012.” said Vijay Singh, CEO Fox Star Studios India.

“Fox Star Studios has established a strong presence in the Indian Film industry in a very short time and have ably demonstrated their marketing and distribution capabilities – we are extremely excited to partner on our next project with people who are like minded and have the vision to take the film places.” said Goldie Behl, producer, Rose Movies.

“In our film we have a new cast of immensely talented actors – Ali Zafar (of Tere Bin Laden fame) and Aditi Rao Hydari (who was last seen in Yeh Saali Zindagi and will be seen in Rockstar as well), who we are sure will definitely appeal to the youth in this coming of age love story and thereby ably demonstrating our commitment to nurture fresh talent in the industry” added Mr. Singh.

But that’s not all – the prince of pop, Ali Zafar, is also doing music for the film. He said,

“Was busy producing music last couple of weeks. You will get to hear next year. For London, Paris, New York I am also composing the music, writing the songs and singing them. Hope I live up to expectations, if any. You will see that in my future projects as well.”

“The film is completely shot internationally, we have just completed the London schedule and are now going to Paris and New York. We are happy to be working with Anu Menon who with her background of London Film School brings to the project the right balance of understanding emotional appeal in an international setting.” says producer Shrishti Arya.

Capturing the angst of the young twenties London, Paris, New York is the story of Nikhil and Lalitha two completely different individuals who are drawn to each other in spite of their differences or perhaps because of it. The film follows their journey of love as they meet in London, Paris and New York for a night in each city. The film is a coming of age love story mirroring 3 states of love and brings back the wit into Bollywood’s romantic comedies. The film is currently in production and is slated for release in first quarter of 2012.

Below some of the pictures from the film’s press conference which was held in London: