Annie Khalid and a1 perform at the O2 Academy

Our princess of pop after her UK debut single last year, now has collaborated with a famous pop band “a1” for a single “Just 3 words.” 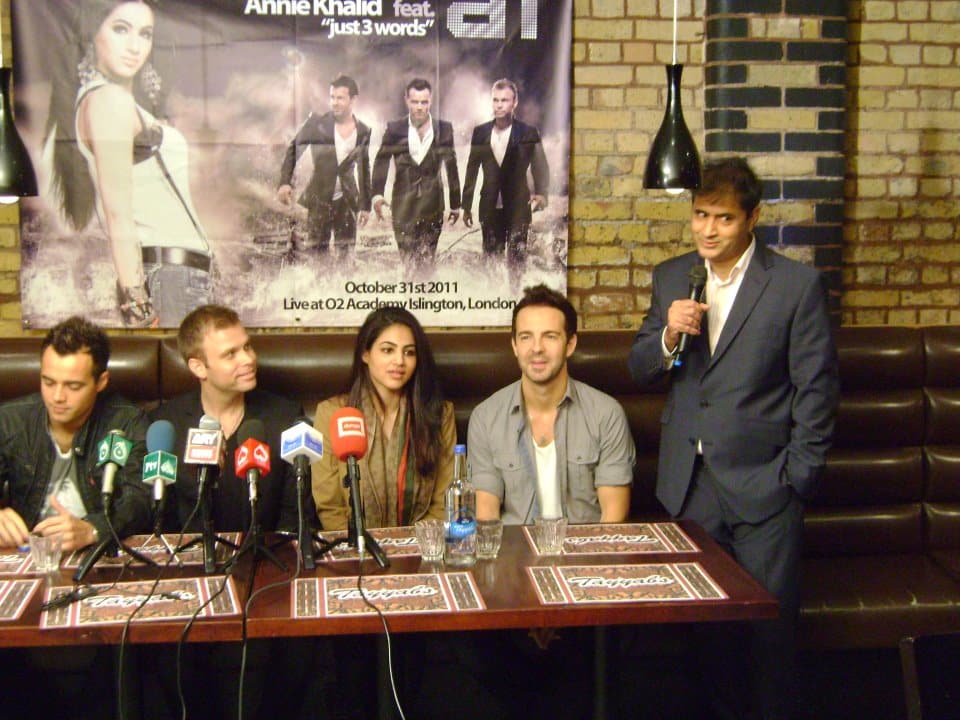 A press conference about their collaboration was held in London on Saturday, 29th October 2011. When asked about working with Annie Khalid, Ben Adams from a1 said “we always had a positive perception of Pakistan’s music but it wasn’t until we met Annie Khalid that we realized the diversity of talent that lies in Pakistan and we look forward to visit Pakistan to promote the single and perform with Annie Khalid very soon.”

“Music is all about exploring different terroritories and increasing fan base with songs that every one can relate to,” added Annie. “The song “Just 3 words” is a very heart felt song which we all can identify our selves with.”

a1, had their first breakthrough in The UK in 1999 with a collection of hit singles taken from their debut album.

They went on to have many International Top 10 and number 1 hits including ‘Caught In The Middle’, ‘Same Old Brand New You’, their cover of the A-ha classic ‘Take on Me’ and ‘Every time’ to name but a few. They achieved massive success in the UK, Europe and across Asia, including a Brit Award for Best British Breakthrough Act in 2001.

In 2002 the band decided to take a break to pursue various solo projects. Seven years later, and due to great demand, the band reunited in Norway and released their album in October 2010 and topped the album charts.

Annie started her music career in late 2005 and after successfully establishing her mark in Pakistan’s very competitive music industry she released her English single, “Be My Baby” mixed by DJ Judge Jules in 2010.

She performed with a1 this October 31st 2011 at the O2 Academy Islington London, where they unveiled their new collaboration which left their fans asking for more.