KARACHI: The Indian rendition of “Coke Studio”, known as “Coke Studio at MTV”, is set to be aired within a week. With the lineup of some remarkable Bollywood singers and unknown folk acts, the season may have a lot to offer/seems promising. 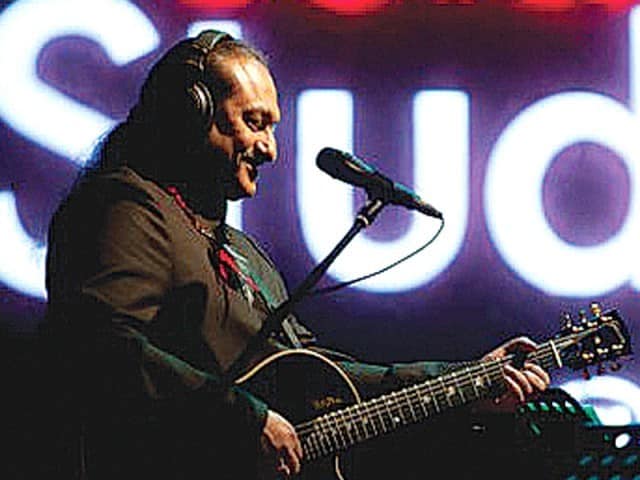 Colonial Cousin’s Leslie Lewis is the music director for the show. Along with taking charge of the control room, he will also take part as an artist and play some of his famous melodies on the set.

Lewis has repeatedly been talking about the cultural discovery that took place via “Coke studio” and how the fusion of different popular artists with not-so-famous maestros has made it a treat to hear.

Each episode will comprise of six session recordings with the first episode set to go on air on June 17 at 7pm on MTV.

Folk musicians from all over India will be experimenting on such a big platform for the first time. Only time will tell whether the experiment will break the Bollywood music stereotype or not.

Colonial Cousins
Formed in 1996, the band comprised the Mumbai-based composer and singer Lewis and renowned vocalist Hariharan. Colonial Cousins, the first Indian band to be featured on MTV Unplugged, has won numerous awards for their music; the most famous being the MTV Asia Viewers’ Choice Award, 1996, and the US Billboard’s Viewers’ Award, 1996.

Shankar Mahdevan
Shankar Mahadevan was born and brought up in Chembur, a suburb of Mumbai. He learnt Hindustani classical music and Carnatic music in his childhood, and started playing the veena at the age of five. He studied under Srinivas Khale, a well known Marathi music composer. He gained recognition upon the release of his first music album, Breathless, in 1998.

Kailash Kher
Kailash Kher has a uniquely soulful and raw voice which was brought to the fore in 2002. His song “Allah Ke Bande”, from the relatively obscure movie Waisa Bhi Hota Hai Part II, made him a household name. Since then he has sung a number of songs in Bollywood, most of which have gone on to become very popular. He is also the founding member of the band Kailasa, which fuses Sufi and Hindustani classical music with rock and contemporary music.

KK
Krishnakumar Kunnath – or KK, as he is better known – first found fame with his album Pal in the year 1999. Prior to this, he had lent his voice to ad jingles. In a span of four years, he had sung an astonishing 3,500 jingles in 11 Indian languages. KK got his Bollywood break with “Tadap Tadap Ke Is Dil” from Hum Dil De Chuke Sanam in 1999. However, he also sung a small portion of the song “Chod aaye hum” from Gulzar’s Maachis.

The Sabri Brothers
The Sabri Brothers, Aftab Sabri and Hashim Sabri, are a qawwali party from Pakistan. They belong to a prestigious qawwal gharana. They were taught music under the age of 10 years by their father and Ustad Ghulam Ali Khan, the famous classical vocalist of India. They believe that lyrics and mood are the most important for qawwali.

Shaan
Shantanu Mukherjee is a renowned Indian playback singer. He is not only an accomplished playback singer, but also has released very successful solo albums. Shaan has been wooing the audiences ever since he stepped into the Indian music industry and has been the voice of all of Bollywood’s leading men. He has also collaborated with a number of international artists, including Blue, Mel C and Michael Learns to Rock.

Shafqat Amanat Ali
Part of the seventh generation of the Patiala gharana, Shafqat was born in Lahore to Ustad Amanat Ali Khan in 1965. With the band Fuzon, his songs “More Saiyan” and “Tere Bina” became massive hits. Fondly nicknamed Rock Star Ustad, he sang “Mitwa” composed by Shankar Ehsaan Loy for the movie Kabhi Alvida Na Kehna, and the rest is history

Shruti Pathak
Having sung in Bollywood films, Pathak is a Filmfare Award-nominated playback singer and lyricist. Her career came alive with the song “Mar Jaawa” from Fashion. Adding Dev D to her resume, Pathak’s career graph is moving upward slowly and steadily.

Tochi Rainaa
Raina was born on September 2, 1965 in Darbhanga, Bihar. Raina’s family originally hails from Kohat but they moved to Patiala during the Indo-Pak partition. Raina comes from an eminent musical family – his grandmother played sitar and Uncle Ratan Singh Ji was a violin player for the Mumbai music industry. He belongs to the musical gharaana of Patiala, and his first guru – for 10 years – was Pt Vinod Kumar Ji, a disciple of Bade Ghulam Ali Khan.

Sunidhi Chauhan
Chauhan began singing at the age of four and was discovered by a local TV anchor. Chauhan also loves western music and cites Mariah Carey and Michael Jackson as her inspirations. She has said that one of her ambitions is to achieve global fame like they did. Sunidhi Chauhan is credited with having sung over 2,000 songs.

Some renowned artists that will feature in ‘Coke Studio at MTV’