KARACHI: Right at the time when the first song was performed at the gig, Noori’s face book page was updated a reunion message for their fans: 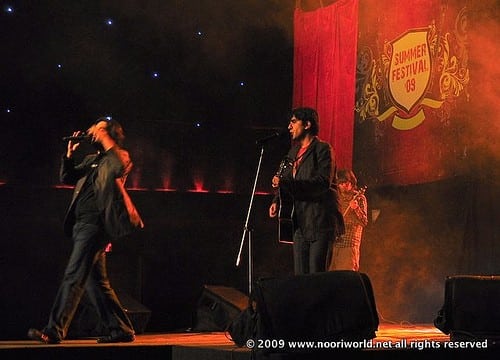 “Believe it or not, in the midst of all this chaos and disintegration, there is an instance of reformation and reconciliation. Sounds cheesy, don’t it? But it’s true as hell!

As of this moment, Noori officially stands reunited to its original four-man line up; as it was at the launch of their debut album, Suno Ke Main Hun Jawan. Ali Noor and Ali Hamza on Vocals and Guitars, Mohammad Ali Jafri on Bass and Louis John Pinto II a.k.a Gumby on Drums.

This is one of those rare moments in music history where all the dispersed original band-members get back together, and no doubt it must be celebrated. Hence, the ‘Gig Not To Be Missed‘!

But as we promised, we wouldn’t let those who missed out on being there to stay out of sync with the celebrations….

So all those fans who have been writing on our walls and website and sending us emails about reuniting, this is the perfect time to scream out that ‘Wooohooo’! … and anything else you would like to say/do!

Over the next week we will be sharing something or the other about this gig and the reunion. So keep visiting this space.

As far as what’s in the future pipe-line? Of course it’s an album! A video or two before that … and straight away, live performances by the ‘Reunited Noori’! But let’s keep that for later, for now Let’s Just Celebrate!