Pakistani Pop rock band Strings and Indian rock band Euphoria have been promoting peace talks between Pakistan and India. Both the bands have been supporting Aman Ki Asha, a peace initiative, for a year now. 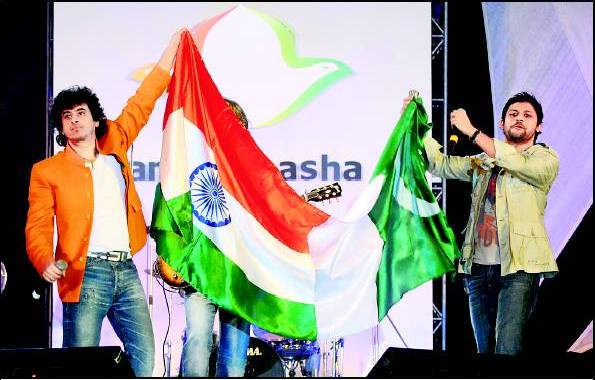 Strings and Euphoria are all set to collaborate again for a song called “Aman Ki Asha” which has been written by Palash Sen, the lead vocalist of Euphoria. The song is about promoting peace between India and Pakistan, and how a peace pact between both the nations shall benefit the entire South-East Asian region.

“The idea for the song germinated at the concert last year. They (Strings) heard it and loved it, and that’s when we decided to do it together,” says Sen, vocalist of Euphoria to Hindustan Times.

Strings is scheduled to fly down to India in February, 2011 for the studio recording of the track which will also be included in Euphoria’s upcoming untitled album.

“Every Indian and Pakistani citizen wants peace. And Aman Ki Asha is all about that. It is a message-oriented song which says both countries need to progress together,” says Faisal Kapadia, vocalist of Strings.