The much-awaited Ali Zafar, Katrina Kaif and Imran Khan starrer Mere Brother Ki Dulhan from Yash Raj Films is now complete. The film which is completely shot in India is a musical romantic-comedy set around a love triangle. It is a fun-filled film for the entire family and revolves around two brothers, Imran Khan and Ali Zafar. Imran Khan plays a character who falls in love with his brother’s fiance (Katrina Kaif) whereas Ali Zafar’s character in the movie is supposed to be suave (sophisticated charming gentleman) but funny suave, and a confused playboy, who is a bit confused about what he wants from life. He plays a flamboyant guy, who is a little loud, and is over-the-top. John Abraham also agreed to do cameo in the laugh riot.

Last night, Ali Zafar informed his fans on his twitter page about the completion of the shoot:

“Last day of shoot for Mere Brother Ki Dulhan. One of the best experiences of my life. Just the way everybody was. So loving and caring!” 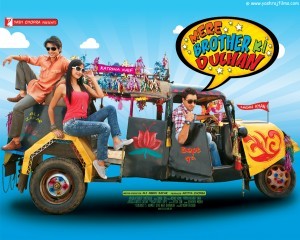 Produced and distributed by Yash Raj Films, the film started shooting in Delhi and Pataudi, before moving on to Chandigarh, Agra, Dehradun, Mussoorie, Haridwar, Dhanaulti, Punjab and Himachal Pradesh for a total of 45 days of filming in northern India and finally finishing the film in Mumbai. It is directed by Ali Abbas Zafar, and stars Ali Zafar, Katrina Kaif, Imran Khan, Tara D’Souza and Others. The music is by Sohail Sen.